Fulfilling a childhood dream - on a locomotive powered by more than 1000 horses. Now that's something!

Gideon Köhler, a longtime professional train driver of LTE-group, fulfilled this dream for me - and our journey even took me on one of the most beautiful railway routes in Europe: the Austrian Semmering.

However, rail cargo transport is not that easy. Of course, there are timetables too, but they are quite different from those we know from passenger traffic.

We met at midnight at Vienna's Central Station, took the last train to Gramatneusiedl, where we expected our locomotive which should take us over the Semmering to Niklasdorf in Styria - towing 500m of tankers, filled with biodiesel. In the wee hours of the morning we picked up the wagons and after extensive safety checks were completed, we were finally able to go south.

The sun greeted us for the first time, at first hesitantly, as many tons of cargo started to move, but by the time we reached Gloggnitz at the foot of the Semmering, she already laughed with all her heart and supported us to dock two "assisting locomotives" to tackle the steep stage now ahead of us.

Gideon turned out to be entertaining and versatile company. He has been working as an engine driver for LTE-group for almost two decades and has known the prosperous company since its early days, when the team, which today has more than 450 employees, consisted of only three pioneers. Just as the career of LTE-group is colorful and dazzling in the last few years, Gideon's life was equally varied: born in the GDR, he soon moved to the Federal Republic of Germany after the fall of the Berlin Wall, where he worked for Deutsche Bahn in Kaiserslautern until life took him to Vienna and finally to Bratislava. From there he manages his professional appointments as well as his passions: music, photography, writing, "everything that is creative" and above all his international friendships, right up to couch surfing, which meets his wanderlust thanks to the internet.

It is already morning, when we arrive in Niklasdorf, at half past nine o'clock. Here a colleague takes over the cargo to Italy. We'll 'hit the hey' for an hour or two, steal a little snack from the kitchen and wait for his arrival in the late afternoon, when he returns to Vienna with similar cargo. 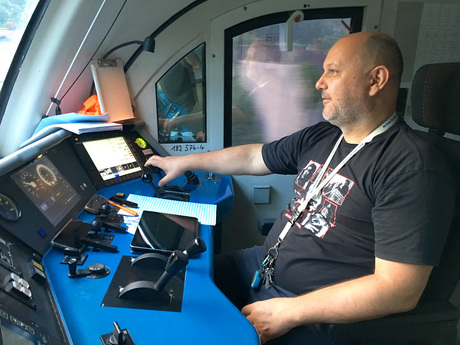